The Maryland Campaign of September 1862, Vol I

Home / The Maryland Campaign of September 1862, Vol I 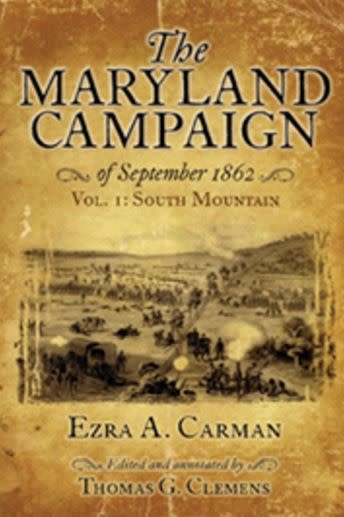 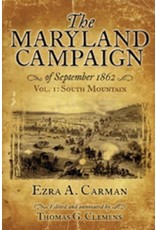 When Robert E. Lee marched his Army of Northern Virginia into Maryland in early September 1862, Maj. Gen. George B. McClellan moved his reorganized and revitalized Army of the Potomac to meet him. The campaign included some of the bloodiest, most dramatic, and influential combat of the entire Civil War. Combined with Southern failures in the Western Theater, the fighting dashed the Confederacy’s best hope for independence, convinced President Abraham Lincoln to announce the Emancipation Proclamation, and left America with what is still its bloodiest day in history.

One of the campaign’s participants was Ezra A. Carman, the colonel of the 13th New Jersey Infantry. Wounded earlier in the war, Carman would achieve brigade command and fight in more than twenty battles before being mustered out as a brevet brigadier general. After the horrific fighting of September 17, 1862, he recorded in his diary that he was preparing “a good map of the Antietam battle and a full account of the action.” Unbeknownst to the young officer, the project would become the most significant work of his life.

Appointed as the “Historical Expert” to the Antietam Battlefield Board in 1894, Carman and the other members solicited accounts from hundreds of veterans, scoured through thousands of letters and maps, and assimilated the material into the hundreds of cast iron tablets that still mark the field today. Carman also wrote an 1,800-page manuscript on the campaign, from its start in northern Virginia through McClellan’s removal from command in November 1862. Although it remained unpublished for more than a century, many historians and students of the war consider it to be the best overall treatment of the campaign ever written.

Dr. Thomas G. Clemens (editor), recognized internationally as one of the foremost historians of the Maryland Campaign, has spent more than two decades studying Antietam and editing and richly annotating Carman’s exhaustively written manuscript. The result is 'The Maryland Campaign of September 1862', Carman’s magisterial account published for the first time in two volumes. Jammed with firsthand accounts, personal anecdotes, maps, photos, a biographical dictionary, and a database of veterans’ accounts of the fighting, this long-awaited study will be read and appreciated as battle history at its finest.

About the Authors: Ezra Ayres Carman was born in Oak Tree, New Jersey, on February 27, 1834, and educated at Western Military Academy in Kentucky. He fought with New Jersey organizations throughout the Civil War, mustering out as a brevet brigadier general. He was appointed to the Antietam National Cemetery Board of Trustees and later to the Antietam Battlefield Board in 1894. Carman also served on the Chattanooga-Chickamauga Battlefield Commission. He died in 1909 on Christmas day and was buried just below the Custis-Lee mansion in Arlington Cemetery.

Thomas G. Clemens earned his doctoral degree at George Mason University, where he studied under Maryland Campaign historian Dr. Joseph L. Harsh. Tom has published a wide variety of magazine articles and book reviews, has appeared in several documentary programs, and is a licensed tour guide at Antietam National Battlefield. An instructor at Hagerstown Community College, he also helped found and is the current president of Save Historic Antietam Foundation, Inc., a preservation group dedicated to saving historic properties.