Do You Remember? The Whimsical Letters of H. L. Mencken and Philip Goodman Edited By Jack Sanders

Home / Do You Remember? The Whimsical Letters of H. L. Mencken and Philip Goodman Edited By Jack Sanders 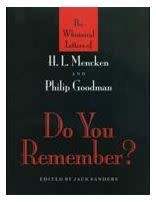 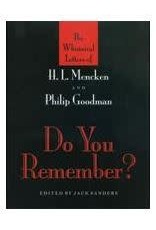 In 1918, while Henry Louis Mencken was editing The Smart Set in New York and working on The American Language in his native Baltimore, his best friend, Philip Goodman, a New York advertising man, bon vivant, and fledgling publisher, wrote a letter "reminiscing" about their old German-American neighborhood in the 1880s and 1890s. He invented characters and events and wrote with irony and affection for those better times. Mencken rose instantly to the challenge and wrote a letter in similar vein. For three years the correspondents tried to out-do each other in telling tall stories. Sanders has reconstructed and annotated this correspondence.