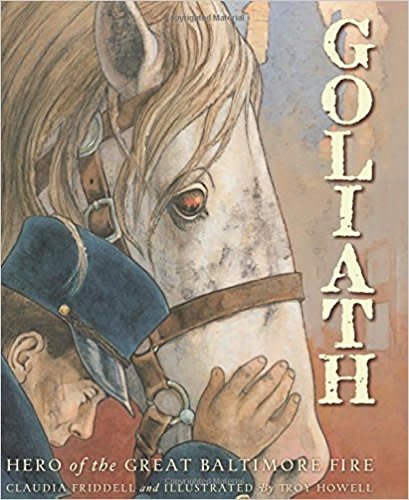 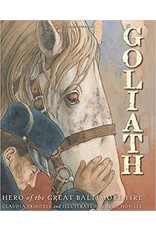 In 1904 the city of Baltimore was almost destroyed by fire. Hundreds of firemen, policemen, soldiers, and citizens battled the blaze for three days. The disaster brings out the best in man and the bravest of deeds, but one hero stands head and shoulders above all...literally. Goliath is a fire horse assigned to Engine Company 15. He is massive in size and mighty in heart and steadfastness. To the men of Engine Company 15, Goliath is the ultimate fire horse. He is the lead horse for the team assigned to pulling the mammoth Hale Water Tower No. 1. When the fire alarm sounds, calling them to action, Goliath leads his team into the blaze. Soon his lifesaving actions will lead him into the pages of history.

Masterful artwork from acclaimed illustrator Troy Howell brings this true story to pulse-pounding life. Educator Claudia Friddell says of her work researching Goliath, "It was a privilege to meet and interview firefighters and fire historians about the Baltimore Fire of 1904." Goliath is her first children's book. Claudia lives in Baltimore, Maryland. Artist Troy Howell has had a prolific career as a children's book illustrator with countless books to his credit, including The Secret Garden, The Ugly Duckling, and Favorite Greek Myths. He received his formal art education from the Art Center in Los Angeles and the Illustrators' Workshops in New York. Troy lives in Falmouth, Virginia.