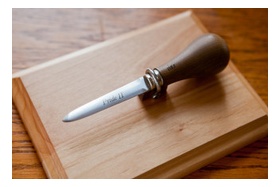 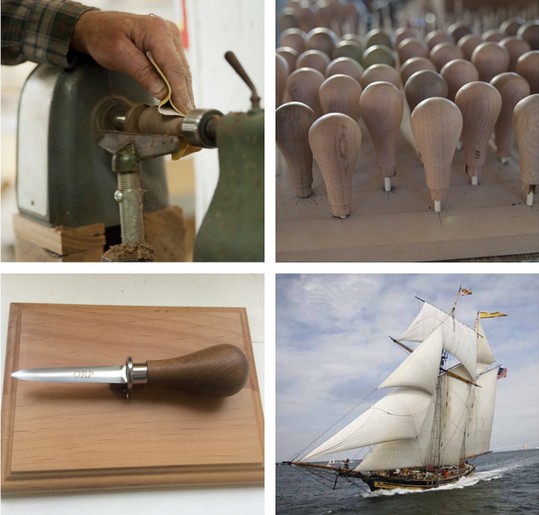 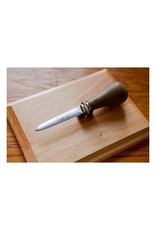 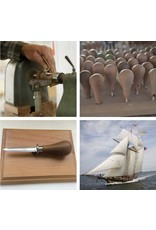 Oyster knives made from wood used to build the iconic tall ship Pride of Baltimore II are being crafted to raise funds to support Maryland’s oyster heritage and preserve its rich maritime history. This limited edition oyster knife was created with love and respect for our local waters. Proceeds from the sales support the Oyster Recovery Partnership and Pride of Baltimore, Inc.

The knife design is a classic historical symbol of Chesapeake Bay culture that is practical for everyday use. Each knife has a 3-inch, stainless steel “Boston” blade, a famous American oyster knife design known for being sturdy, versatile and dependable. It is one of the earliest known types used to “split the rock.”

Knife handles are carved from timbers of bullet tree and mahogany, used in framing of Pride II’s hull and as trim on above-deck structures. Each laser engraved knife comes with a certificate of authenticity and matching number from 001 to 500. The wood was preserved in climate-controlled conditions since Pride II was built in 1988.

Pride of Baltimore II is a reconstruction of an early 19th-century Baltimore Clipper, as was her predecessor, Pride of Baltimore. The name “Pride of Baltimore” was the nickname of Chasseur, the largest and boldest of the legendary, Baltimore-built topsail schooners that helped win the War of 1812 and launched the city as a commercial and maritime center. Since the mid-1970’s, these modern-day “Prides” of Baltimore have promoted historical maritime education, fostered economic development and tourism, and represented the people of Maryland in ports throughout the world. Since her commissioning in 1988, Pride II has sailed 250,000 nautical miles, visited more than 200 ports in 40 countries, and inspired millions worldwide. For more information on the Pride of Baltimore II, visit: www.pride2.org.

The Oyster Recovery Partnership was established as a nonprofit organization to help manage and implement Maryland’s oyster restoration efforts. Oysters play a vital role in improving Chesapeake Bay water quality by filtering excess nutrients. They create habitat for a multitude of marine life, including the Blue Crab and Striped Bass. Over the last 22 years, ORP and its partners have planted more than 6.7 billion oysters on 2,200 acres of oyster reefs in Maryland, including the largest man made oyster reef in the country. ORP manages the region’s oyster shell recycling program and supports other sustainable fisheries management efforts.