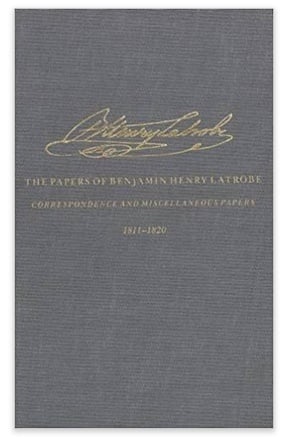 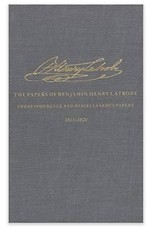 This is the last of three volumes of selected correspondence and miscellaneous papers of Benjamin Henry Latrobe (1764-1820), America’s first professional architect and engineer. Covering the final decade of Latrobe’s life, it includes about 375 documents, comprised of letters (mostly from Latrobe), government reports, pamphlets, and newspaper articles.

The years from 1811 to 1820 included both setbacks and triumphs for Latrobe. On the one hand we learn about the ill-fated New Orleans Waterworks project, during which his son Henry died of yellow fever; bitter disputes with Robert Fulton over Latrobe’s service as agent of the Ohio Steam Boat Company; and acrimonious relations with the commissioners who oversaw Latrobe’s rebuilding of the U.S. Capital after the War of 1812. On the other hand, there were such successful projects as the Baltimore Cathedral and St. John’s Church in Washington, D.C., and a gratifying collaboration with Thomas Jefferson on plans for the University of Virginia.

Latrobe thrived artistically if not financially in America, and he was instrumental in bringing a sense of grandeur to American architecture. This volume of Latrobe’s papers, like the others, is a tribute to the lasting influence he exerted on the culture of the young republic.