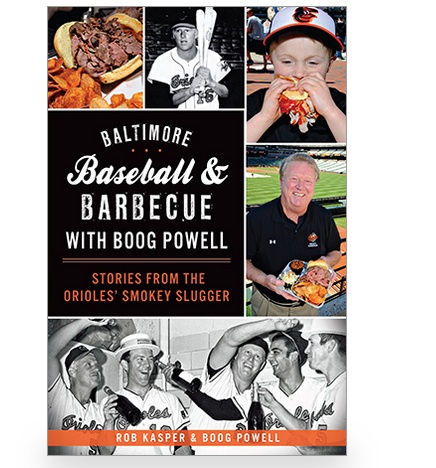 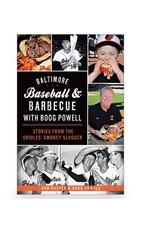 Since he started smacking long balls for the Baltimore Orioles, John "Boog" Powell has enjoyed the gustatory delights of his adopted hometown. A four-time All-Star and a fixture in two World Series, Boog also knows how to make one heck of a pit beef sandwich. Backyard barbecues at Boog's Baltimore row house were once a post-game tradition for the team. After hanging up his spikes, the former MVP set up his now iconic barbecue operation at Camden Yards. Baltimore author Rob Kasper takes a behind-the-scenes look at the life of this smoky slugger from his Florida boyhood through his rise to major-league glory and beyond. Told in Boog's colorful style, this rollicking journey is spiced with recipes and topped off with interviews from former teammates like Brooks Robinson, Frank Robinson and Jim Palmer.

This is the second book Rob Kasper has written for The History Press and Arcadia Publishing. The first, "Baltimore Beer: A Satisfying History of Charm City Brewing," was published in 2011. Prior to writing books, he was a features columnist for the Baltimore Sun. During his thirty-three years at the Sun, joining in 1978 leaving in 2011, he won numerous writing awards and authored a nationally syndicated food column.

John "Boog" Powell is a former major league baseball player. During his sixteen seasons in the big leagues he played for the Baltimore Orioles, the Cleveland Indians and the Los Angeles Dodgers. He was a four-time All Star; a prominent member of two World Champion Oriole teams, 1966 and 1970; and in 1970 was named the American League's Most Valuable Player. In 1992 at the debut of Oriole Park at Camden he opened Boog's BBQ.